Starting with an existing database

The following example illustrates how to do use code first to to generate a model from a SQL Server database in a new console application using the CLI tools.

First, create a folder for the project:

Then navigate to it:

Then create a new project:

Add the Entity Framework Core and Tools packages to the project:

Test to see if ef commands are available to you:

This should result in the initial help for the EF tools being displayed:

Could not execute because the specified command or file was not found. Possible reasons for this include:
* You misspelled a built-in dotnet command.
* You intended to execute a .NET Core program, but dotnet-ef does not exist.
* You intended to run a global tool, but a dotnet-prefixed executable with this name could not be found on the PATH.

You use the DbContext Scaffold command to generate the model. The command has two required arguments - a connection string and a provider. The connection string will depend on your environment and database provider. The provider argument is the Entity Framework provider for your chosen database. This example uses the AdventureWorks sample database for SQL server provided by Microsoft.

Once you have executed the command, you will see that a folder named Model has been created in the project folder, containing a collection of class files representing the entities in addition to a file for the DbContext class: 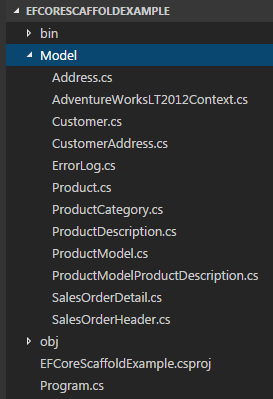 The DbContext class will take the name of the database plus "Context", You can override this using the -c or --context option e.g.

The resulting model is configured using the Fluent API by default, which is the recommended approach. The configurations are placed in the generated context's OnModelCreating method. However, if you prefer to use Data Annotations for configuration, you can use the -d or --data-annotations switch:

Since Data Annotations only cover a subset of configuration options, you are likely to find that the Fluent API has also been used to configure the model.

The recommended approach to keeping changes to the database in sync with the generated model is to use migrations i.e. to make the changes to the model first, and then use tools to generate code that propagates the modifications to the database. However, depending on your circumstances, this may not always be an option. If you need to re-scaffold the model after database schema changes have been made, you can do so by specifying the -f or --force option e.g.:

All of the class files will be overwritten, which means that any amendments that you might have made to them e.g. adding attributes or additional members, will be lost. You can mitigate this by opting to use the Fluent API for configuration and using separate configuration classes. In addition, you can use partial classes to declare additional properties that don't map to columns in the database tables.

If you are working with Visual Studio, you can use the Package Manager Console commands to generate the the code files for the model. The equivalent command to the last CLI command just above is:

In previous versions of Entity Framework, it was possible, once the model has been created, to add a migration that did not affect the schema of the existing database using the -ignorechanges option. This option does not exist in Entity Framework Core, so the workaround is to create a first migration and then to delete or comment out the contents of the Up method prior to applying the migration to the database. This will result in a model and a database schema that match.